People march during the nationwide protest demanding the end to the Trump administration in New York City on Saturday. Protesters have often accused President Trump of being fascist. 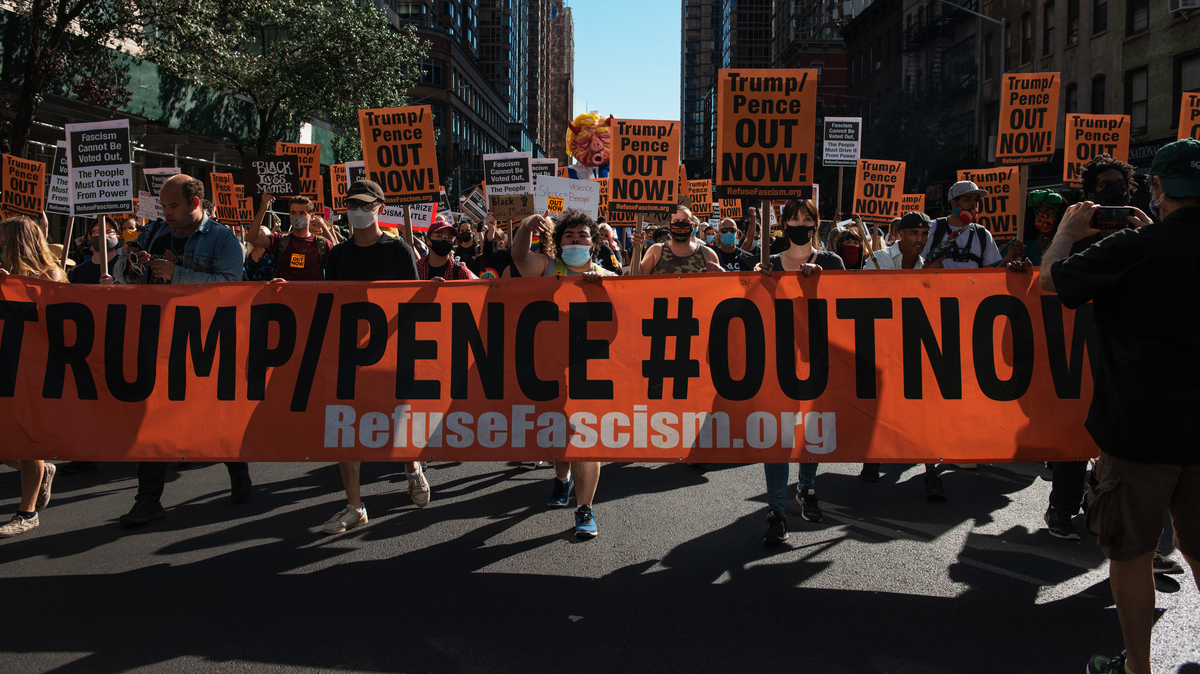 People march during the nationwide protest demanding the end to the Trump administration in New York City on Saturday. Protesters have often accused President Trump of being fascist.

Since it was first popularized by Italian dictator Benito Mussolini in the 1920s, fascism, and accusations of it, have been a common theme in American political discourse.

Voices on the left warned of fascism in the form of Ronald Reagan and George W. Bush; conservatives have accused liberals of actually being the ones to embrace the far-right ideology.

Historians have noted similarities between Donald Trump and Mussolini since before the 2016 election. Some of the racial justice protesters this summer have said they are fighting fascism in the form of President Trump. And the presence of antifa — anti-fascist — protesters at some demonstrations has upped attention to the word.

But what is and isn’t fascist isn’t even agreed upon by scholars.

Jason Stanley, a professor of philosophy at Yale University, offers one perspective on the word. He defines fascism as “a cult of the leader who promises national restoration in the face of humiliation brought on by supposed communists, Marxists and minorities and immigrants who are supposedly posing a threat to the character and the history of a nation.”

Stanley, who is the author of the 2018 book How Fascism Works: The Politics of Us and Them, tells NPR’s All Things Considered: “The leader proposes that only he can solve it and all of his political opponents are enemies or traitors.”

Stanley says recent global events, including the pandemic and the protests, have substantiated his concern about how fascist rhetoric is showing up in politics and policies around the world.

Well if someone described to you, “Here’s country X. The leader of country X claims that he is going to remain in power for many years beyond what is legal. He sends federal forces in to quell largely peaceful protests for racial justice in his country. His attorney general seems dedicated to him over the rule of law. The major political party that controls the courts and most of the government has, as their entire platform, devotion to him.”

On how conspiracy theories can be used as fascist tactics

Conspiracy theories destroy an information space. The goal — fascism is based on a friend-enemy distinction, so you’re either with them or against them. The enemy is the enemy of civilization. What it does is it destroys the information space. It makes you think that even if your guys are corrupt and lying, it is because [the leader is] facing a mysterious cabal that is controlling things that are trying to foment a race war. This is the basis of the Ku Klux Klan ideology.

On what gives him hope

[The U.S.] is the home of anti-fascist resistance — not just our soldiers in World War II but our intellectuals and journalists and nonviolent protest movements and revolutionaries here who have confronted our own racial history that so influenced Hitler. So we have the seeds in this country of the evils that were the foundation of many anti-democratic regimes, but we also have the flowers that stopped them.

Kira Wakeam and Tinbete Ermyas produced and edited the audio version of this story.