A demonstrator is pepper-sprayed July 30 shortly before being arrested during a Black Lives Matter protest at the Mark O. Hatfield United States Courthouse in Portland, Ore. 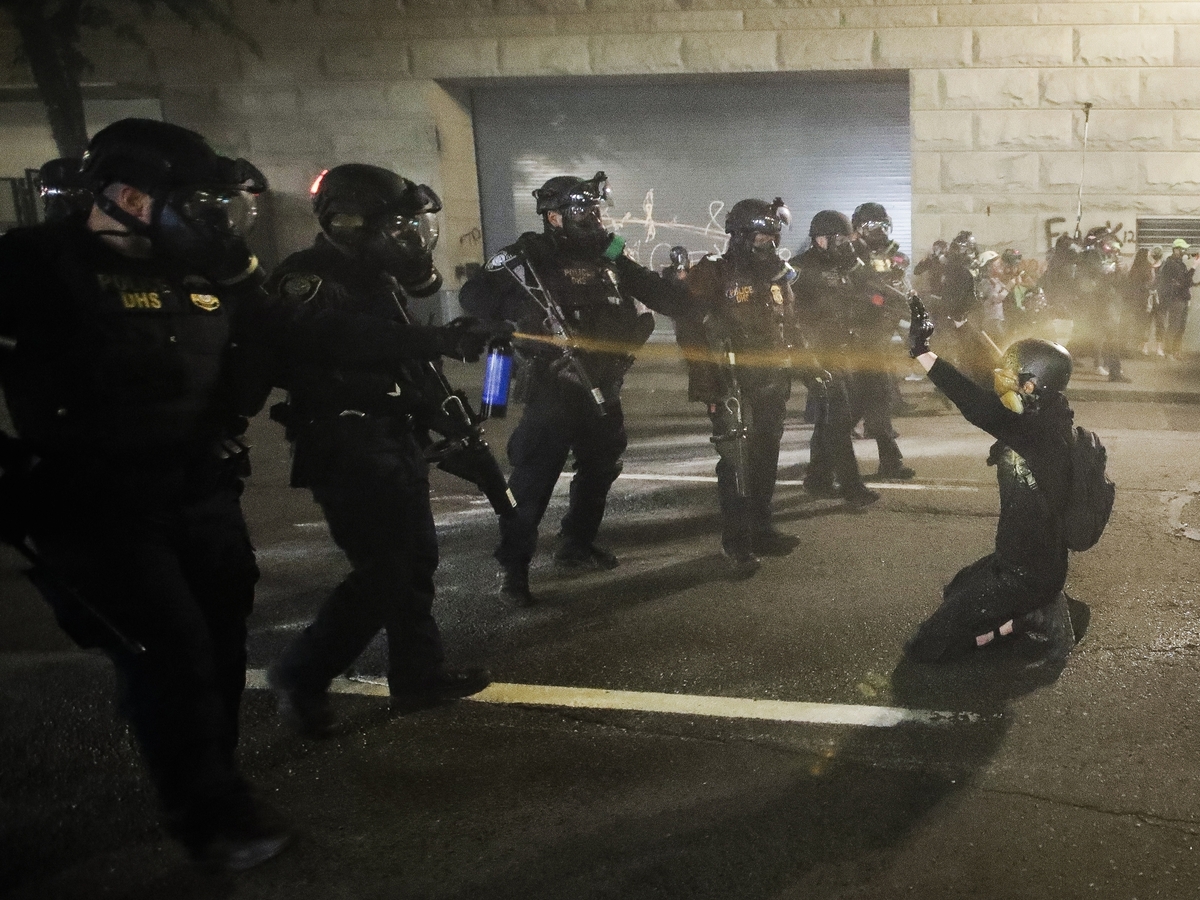 A demonstrator is pepper-sprayed July 30 shortly before being arrested during a Black Lives Matter protest at the Mark O. Hatfield United States Courthouse in Portland, Ore.

In President Trump’s telling of it, Portland, Ore., is a city under siege by violent radical leftists, and he’s suggested that only the strong hand of federal law enforcement can save it.

On Fox News this week, Acting Homeland Security Secretary Chad Wolf admonished state and local leaders there and elsewhere for failing to restore law and order, and he touted the administration’s response.

“We’ve seen about 300 arrests across this country regarding civil unrest and protest, violent protesting, I’d say criminal protesting, criminal rioting,” Wolf said. “About 100 of those have been in Portland specifically, and I know the Department of Justice has charged about 74 or 75 individuals in Portland there with different federal crimes.”

But an NPR review of the federal cases brought in Portland shows that the majority of the charges are for what could be considered minor offenses.

As of Aug. 28, the U.S. Attorney’s Office for Oregon had charges outstanding against 74 people in connection with the Portland unrest.

Of those cases charged, 11 are for citations and 42 are for misdemeanors, meaning that more than 70% of the total charged cases are not felonies.

“A citation is the least serious of a charge, it’s really more of a ticket,” said Lisa Hay, the federal public defender for Oregon.

The misdemeanor cases are almost evenly divided between class A and class C misdemeanors.

“That might be somebody who’s in front of the federal courthouse, on the sidewalk, and an order is issued to disperse, and they didn’t disperse or they didn’t move away quickly enough,” said Hay.

The class A misdemeanor cases in Portland have typically involved an alleged assault of a federal officer but without physical contact. Such a case could involve, for example, verbally abusing an officer or pretending to throw an object.

These sorts of misdemeanors are punishable by no more than one year in prison.

Steve Kanter, a law professor and former dean at Lewis and Clark Law School in Portland, said the federal government’s decision to arrest and charge people for offenses like failing to comply with a lawful order suggests that law enforcement officer were acting in a selective manner “to control and chill expression and activity.”

“There should be a clear dividing line between people who are trying to get their voices heard, fully protected by the First Amendment and the right to assemble,” he said, “and people that engage unjustified violence against persons or property.”

Kanter said those who engage in violence — and he made clear that there have been people in Portland doing exactly that — should be prosecuted.

The vast majority of the protesters in the city have been nonviolent, but some demonstrators have set fires, thrown projectiles and in some instances attacked federal officers.

After President Trump sent a surge of federal law enforcement to Portland in July, the area around the federal courthouse downtown for weeks was a battle zone at night as some protesters clashed with federal agents guarding the facility.

Federal prosecutors have brought more serious felony charges against those who allegedly engaged in the violence — 20 cases as late last week, according to NPR’s review of the court papers.

The president and Attorney General William Barr have repeatedly blamed what they call left-wing radicals and members of the antifa movement for the violence in Portland and elsewhere.

“I’ve talked to every police chief in every city where there’s been major violence and they all have identified antifa as the ramrod for the violence,” Barr told CNN this week.

None of the court documents from federal cases in Portland reference antifa or any sort of broader antifascist movement or conspiracy.

In a few of the case files, there are references to apparent agitators. For instance, one defendant told authorities that he was handed a firework by a masked person in the crowd and told to throw it.

But there is nothing more substantial in the federal court record in Portland at this point to support the attorney general’s assertions.

In the public record, the man suspected of fatally shooting a far-right activist in Portland last weekend said that he supports the antifascist movement but is not a member of it.

The man, Michael Reinhoel, was killed Thursday night as law enforcement officers tried to arrest him.