Elizabeth Neumann, assistant secretary of counterterrorism and threat prevention at the Department of Homeland Security, testifies a House subcommittee hearing on confronting white supremacy and the adequacy of the federal response last June. 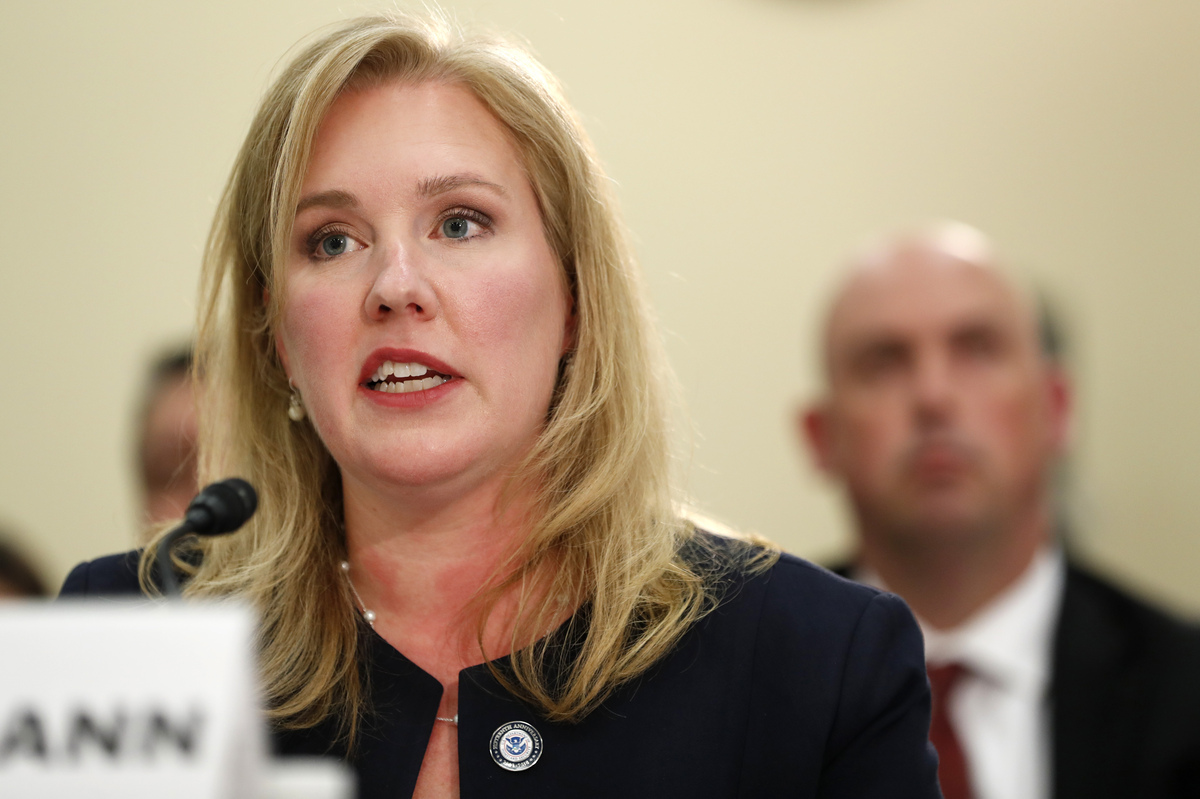 Elizabeth Neumann, assistant secretary of counterterrorism and threat prevention at the Department of Homeland Security, testifies a House subcommittee hearing on confronting white supremacy and the adequacy of the federal response last June.

A former top Department of Homeland Security official who resigned in April says the Trump administration is creating the conditions for domestic extremism to flourish in the United States.

Elizabeth Neumann left her position as assistant secretary of counterterrorism and threat prevention after three years at DHS. In an interview with NPR’s Steve Inskeep, she offers a candid assessment of the counter-terrorism community’s failure to address the threat posed by domestic extremism.

She says the administration is paving the way for even more violence.

The life-long Republican voted for Trump in 2016, albeit, she says, “very reluctantly.” She shared some of the concerns that others in national security had expressed publicly about his fitness for office, but decided to join DHS with her nearly 20 years of experience in homeland security issues to help the new administration.

Neumann saw signs of rising domestic extremism soon after she arrived at DHS in February 2017. At the time she was serving as the deputy chief of staff for then-Secretary of Homeland Security John Kelly.

“We had a spate of vandalism of Jewish cemeteries in a couple of places across the country that made national news, enough for us to go, ‘This is interesting. What is this about?’ ” she says. “And then we started hearing from our law enforcement partners that they were seeing a rise in hate crimes, particularly anti-Semitic hate crimes. And we found that a little puzzling because there wasn’t any one group claiming credit for it.”

By July of that year, Kelly had moved to the White House to serve as Trump’s own chief of staff. And by March of 2018, Neumann found herself stepping into the role of assistant secretary for counter-terrorism and threat prevention. In that capacity, she was officially in charge of emerging threats — and had identified violence perpetrated by right-wing extremists as a major one.

Neumann saw the diffuse nature of right-wing extremist violence as a particular challenge. “It was hard for the counterterrorism community to put their finger on it, in large part because the movement is more of a movement than a group or an organization,” she says.

That lack of official group cohesion reminded Neumann of the threat posed by the Islamic State in Iraq and Syria (ISIS). She watched domestic extremists use the same tactics as the terrorist group.

“They borrowed from ISIS’s playbook and they learned how to radicalize people online,” she says. In the post-Sept. 11 United States, domestic extremists also adopted an emphasis on smaller attacks that could be carried out quickly with limited planning. What Neumann saw was “the pivot to bring your own weapon to the fight, use whatever you have: a knife, a gun, a vehicle, vehicle ramming,” she says. “We’ve seen a number of vehicle rammings this summer, in fact.”

But unlike the urgent inter-agency response to ISIS, Neumann says there was no clear effort to combat violent extremists on the right.

“If you had a very clear voice at the top, from the president, from other senior leaders in the Republican Party, denouncing this and warning conservatives — warning Republicans — that these groups are trying to recruit you based on things that might sound like a typical conservative belief, but behind it is this insidious, ugly, evil thing, if we had more clear voices talking about it — it would somewhat inoculate people from that recruitment and that radicalization,” she says. “But instead, we have the opposite effect. We have the president not only pretty much refusing to condemn, but throwing fuel on the fire, creating opportunities for more recruitment through his rhetoric.”

Neumann says she sees how that rhetoric has led to acts of violence. One example: the El Paso shooting in August of 2019, in which a 21-year-old gunman shot and killed 23 people and injured 26 others in the parking lot of a Walmart.

“When you see the El Paso attacker, his manifesto was citing language and rhetoric that comes from the president’s campaign rallies about an invasion from Mexico and how we’ve got to protect our country,” she says.

Neumann believes that unauthorized immigration across the southern border is a security issue, but she sees Trump’s way of speaking about that issue as dangerous because it sows fear.

“He uses rhetoric to scare people. This is a known psychological tactic that if you get people to fear, they tend to follow you to the solution of ‘How are we going to save ourselves?’ And his answer is, ‘It’s me. If you vote for me, I will save you,’ ” she says. “Well, for some people, the way that they think that they need to protect themselves, it’s more than just a vote for a president. It’s ‘let me go kill people.’ “

The El Paso shooting was a key moment in Neumann’s efforts to secure funding to address domestic extremism. Her team was invited to the White House for a series of task force meetings to try to address the problem. She says they had already been working on a strategy to combat domestic extremism for a year and a half before the El Paso shooting, and they presented it at the White House.

They seem to understand that for whatever reason, if we use the term ‘domestic terrorism’ or we talk about the white supremacist language, that seems to derail things at the White House.

The White House seemed to support the strategy — but under one condition. “They just asked for it to be couched in terms of ‘preventing violence’ and not ‘domestic terrorism.’ And my sense was they were doing that pragmatically,” she says. “They seem to understand that for whatever reason, if we use the term ‘domestic terrorism’ or we talk about the white supremacist language, that seems to derail things at the White House.”

NPR has reached out to the White House for comment and will update this story with any response.

When Trump finally started using the term “domestic extremism” himself in the summer of 2020, it was in reference to the violence and looting that occurred during the protests across the country against police brutality targeting Black Americans, which the President attributed to “antifa.” For Neumann, this was an obvious red herring. She says that the numbers don’t bear out the idea that left-wing violence is as much of a problem as right-wing violence, and arrests during the summer’s protests demonstrate that.

“If you look at the people that have been arrested for that, by and large, I mean, it’s the boogaloo movement or it’s an association with QAnon. It’s the right side of the spectrum. It is not antifa.” She’s unequivocal about this “The threat of domestic terrorism is not from antifa. It is from these right-wing movements.”

The threat of domestic terrorism is not from antifa. It is from these right-wing movements.

‘His style is chaos itself’

Neumann is perhaps even more worried about what’s to come as the election elicits possibly even more inflammatory words out of the White House.

She’s also concerned that people who served as “guardrails” around the president have left the administration. Those “adults in the room,” she says, took the heat from the White House in order to allow people like her to keep carrying out their work. This fear is what prompted her to speak publicly, while many other senior administration officials have declined to do so.

“I am really concerned that in a second term, he will not have the ability to make wise decisions because there are no officials surrounding him anymore that have the experience and the gravitas to be able to tell him, ‘No, you cannot do this, this is illegal.’ Or ‘If you do this, it is likely that this other nation-state will respond in a drastic way that will lead us to war.’ That’s what’s at stake here,” she says.

Ultimately, Neumann says she decided last fall to step down when she realized she could not bring herself to vote for Trump again. She says she plans to vote for Joe Biden instead, her first vote for any Democrat.

Neumann hopes that the work she was able to accomplish at DHS will continue to serve the country well.

“We have bipartisan support in Congress with the work that the government needs to do to build out prevention capability across the country,” she says.

But she believes that that work will have been in vain if Trump wins a second term.