U.S. President Donald Trump speaks during the Republican National Convention on the South Lawn of the White House on Thursday. 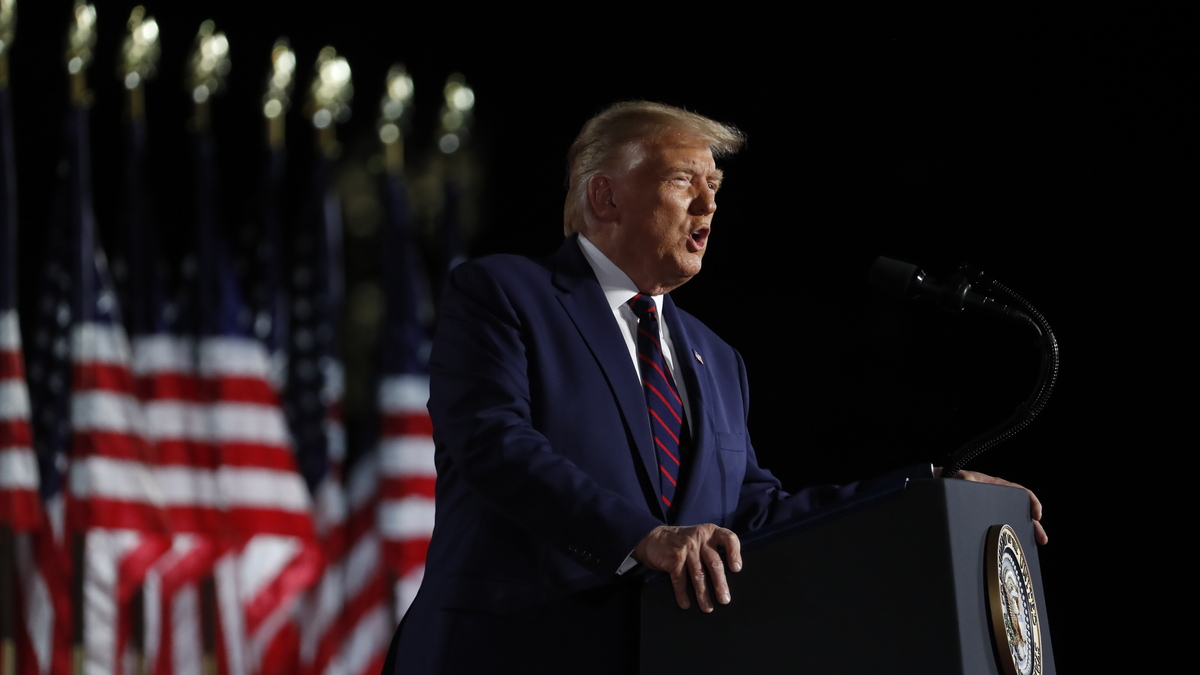 U.S. President Donald Trump speaks during the Republican National Convention on the South Lawn of the White House on Thursday.

In the face of contradictory messages coming from members of his own party, members of the U.S. intelligence community and even a member of his own family, President Trump continues his months-long campaign against efforts to expand voting by mail in face of the coronavirus pandemic.

“The fraud and abuse will be an embarrassment to our Country,” Trump tweeted Wednesday.

On Monday, he claimed without evidence mail ballots may purposely be manipulated to be sent to Democratic areas and not Republican areas. And on Sunday, he decried a system of ballot return that the federal government calls “secure and convenient” in official documents.

The president has questioned the legitimacy of U.S. elections for years, although the reasons for his skepticism shift almost weekly. After the 2016 election, where he lost the popular vote but won the Electoral College, Trump baselessly claimed “millions and millions” of people voted illegally in person.

Since the pandemic took hold in the U.S. this spring, states across the country have expanded voting by mail in an effort to limit the number of people who crowd into polling places on Election Day. A Washington Post analysis estimates that at least 83% of Americans are eligible to vote by mail this fall.

Trump quickly started criticizing those efforts although his reasons for opposing it continue to change.

In April, Trump said any expansion of mail ballots would lead to widespread fraud. In June, Attorney General William Barr argued people should need an excuse to vote by mail. Earlier this month, Trump said no-excuse absentee voting is fine but claimed the Postal Service couldn’t handle the increase in election mail. As of this week, Trump seems to have backtracked on that claim, too, saying the USPS can handle the increase in mail ballots but elections offices can’t.

“It’s not the post office,” Trump said, in an interview this week with The Washington Examiner. “No, it’s the elections office. The post office — look, this is a con job. It’s like the Russian hoax. The post office has run the way it’s been run forever.”

Whatever the reason, it’s clear Trump is increasingly isolated in the fight against the mail, with many in his party moving past his position.

Many Republicans fear that Trump’s language on voting by mail could harm their chances this fall. Initial data shows Democratic voters far outpacing Republicans when it comes to requesting an absentee ballot, including in battleground states.

In Florida, Democrats lead Republicans by more than 660,000 requests, according to data compiled by University of Florida political science professor Michael McDonald. In Pennsylvania, twice as many Democrats have requested ballots as Republicans. In North Carolina, triple the number of Democrats have asked for ballots.

In Wisconsin, a recent Marquette Law School poll found just 14% of voters planning to vote by absentee to be Trump supporters.

All that puts local Republicans in a bind, considering in-person voting could be a dangerous proposition in some areas depending on the state of the pandemic, and mail-in voting has traditionally been a reliable turnout booster for Republicans in many states.

“The system’s pretty solid,” Bishop said. “You have to sign the ballot, you need a witness, you can track your ballot.”

Some of Trump’s closest allies have recently endorsed voting by mail.

“Voting absentee is a safe and secure way to guarantee your voice is heard,” Trump Jr. says in the call, which was first reported by Politico.

And Sen. Tim Scott, R-S.C., who delivered a keynote speech during the Republican convention, said in an interview with The Today Show, that he was “very confident that we will have fair elections throughout this country.”

“I’ll tell you how I feel about it, and what I think most Americans believe, that this process of mail-in ballots will prove to work out just fine,” Scott said. “I’m going to have confidence that all the moving pieces will actually fit together and we’ll have a very strong, integrity-driven, character-driven election.”

During an election security briefing Wednesday, FBI officials made what should have been an unremarkable statement: they’ve seen no evidence of any foreign plot to counterfeit or forge mail ballots.

Election officials scoffed at the idea when Attorney General William Barr mentioned it for the first time earlier this summer, but both the attorney general and President Trump continued to repeat it as a potential reason not to expand mail voting over the past few months.

“MILLIONS OF MAIL-IN BALLOTS WILL BE PRINTED BY FOREIGN COUNTRIES, AND OTHERS,” tweeted Trump in June. “IT WILL BE THE SCANDAL OF OUR TIMES!”

The FBI, which is formally part of the Justice Department, said Wednesday it has “no information about any nation state” engaging in any effort to undermine any aspect of mail voting, and also noted how difficult any coordinated fraud scheme involving mail ballots would be to pull off because of the decentralized nature of U.S. elections and the numerous safeguards that are in place.

Regardless, election officials and experts worry that Trump’s insistence on conspiracy theorizing about mail ballots and voting in general will affect the public’s confidence in whatever result occurs in November.

“Any of these issues, when they get used for partisan political purposes, it’s not good,” said New Mexico Secretary of State Maggie Toulouse Oliver, a Democrat. “The inherent side effect is that it fosters distrust and it fosters a perception of unfairness.”

Miles Taylor, a former Department of Homeland Security chief of staff during the Trump administration, told The Washington Post this week that Trump’s language has effectively been an “open door” for foreign adversaries hoping to meddle in the race this fall.

In a recent op-ed in The New York Times, political scientist Rick Hasen argued that delegitimizing the results may actually be Trump’s intention, with an eye toward contesting or casting doubt on a potential victory by his Democratic rival, Joe Biden.

“We cannot count on Mr. Trump to speak responsibly about the fairness of the 2020 vote count,” Hasen wrote. “Indeed, he is one of the biggest threats to the integrity of the election.”