Dr. Chris Hoover (left) and Dr. Connie Liu (right) walk through their home with their children Taro, 3, and Hiro, 4 months, in Gallup, N.M. On a short reporting trip across the Southwest, NPR met very different families and asked them the same simple question: What’s been keeping you at night? 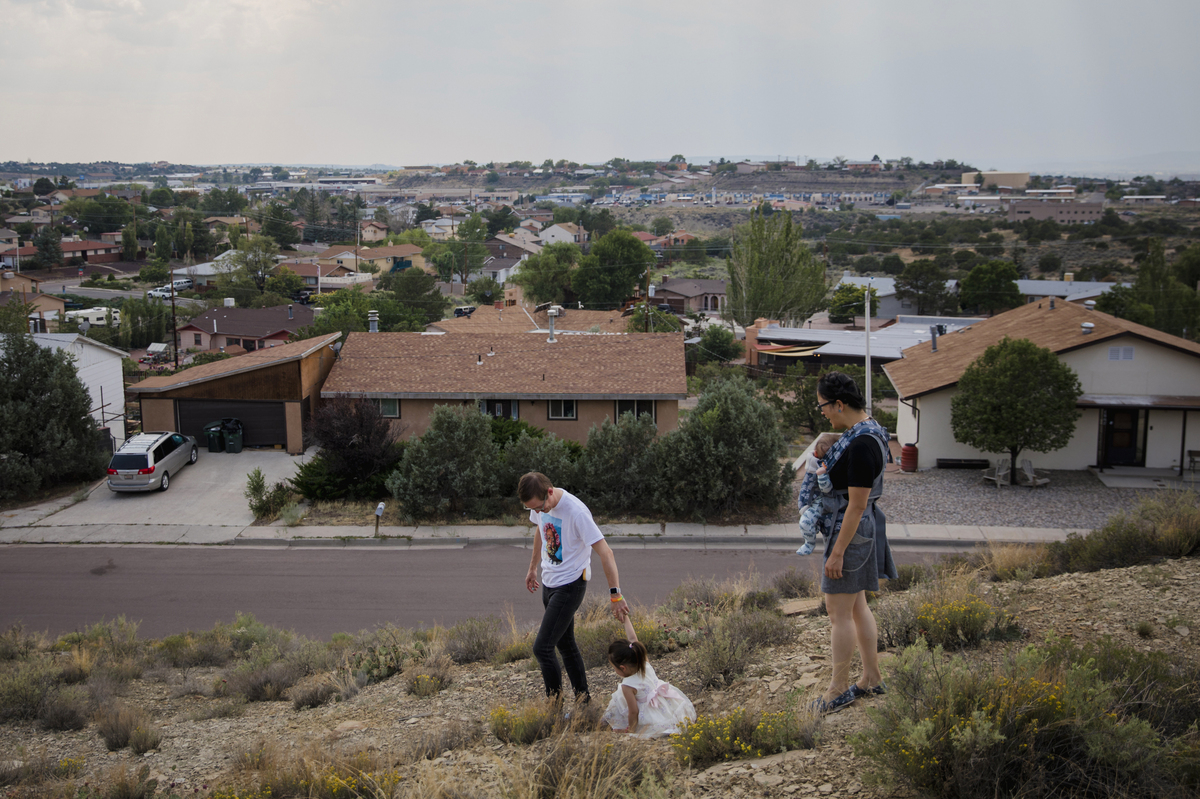 Dr. Chris Hoover (left) and Dr. Connie Liu (right) walk through their home with their children Taro, 3, and Hiro, 4 months, in Gallup, N.M. On a short reporting trip across the Southwest, NPR met very different families and asked them the same simple question: What’s been keeping you at night?

The relentless spread of COVID-19, the ensuing economic crisis and the reckoning around social injustice has made this a year like none other.

NPR wanted to know how these cataclysmic, consequential events have affected American families and how those experiences might shape their political choices in the upcoming presidential election.

On a short reporting trip across the Southwest, we met five very different families across the political spectrum and asked them all the same simple question: What’s been keeping you up at night?

One thing was clear from their answers: Americans are under a great deal of stress. From a father on the verge of losing his business to a new widow worried about violence in big cities where her kids live, families are feeling the weight of all of it. (You can hear all five conversations with Morning Edition‘s David Greene by clicking the play button above.)

A window reflection through the empty inside of Broken Trail Distillery & Brewery in Albuquerque, N.M. 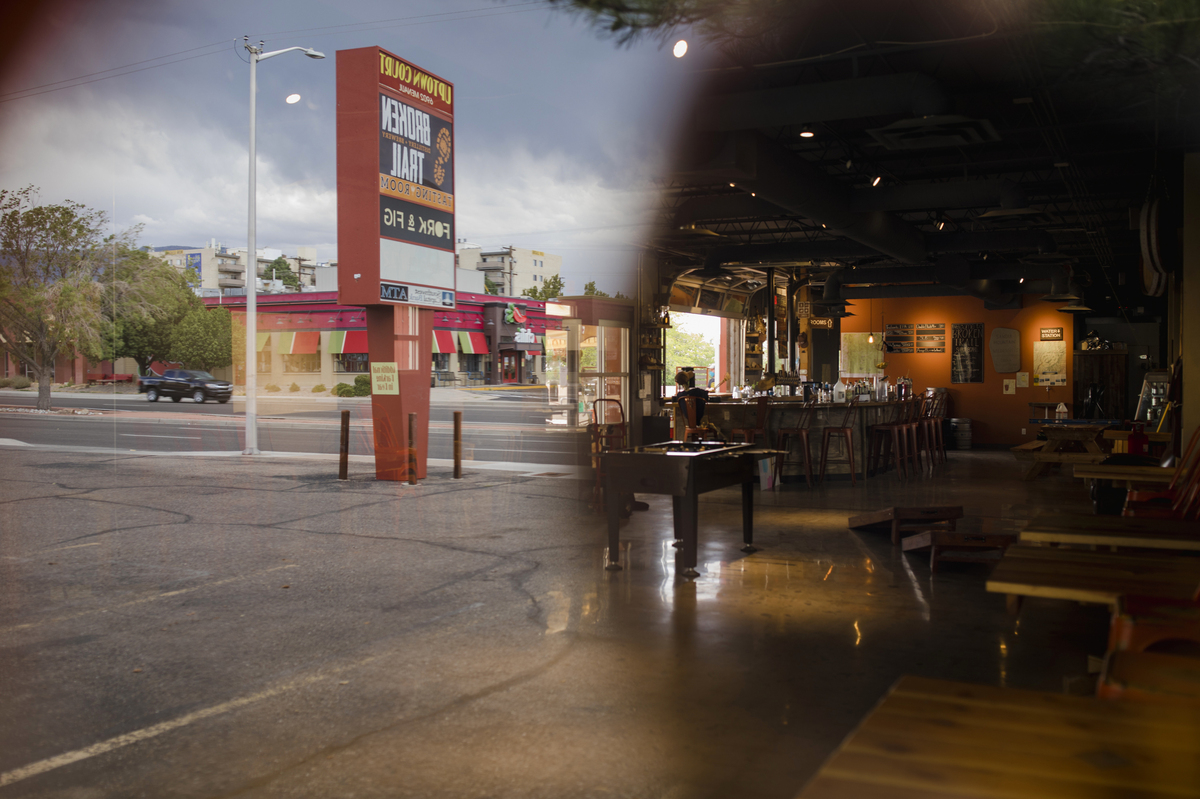 A window reflection through the empty inside of Broken Trail Distillery & Brewery in Albuquerque, N.M.

Matt Simonds, 39, owns Broken Trail Distillery & Brewery in Albuquerque, N.M., and has been struggling to keep his business afloat since lockdown orders were issued in March.

He’s burning through cash so fast he worries his business may survive only another month.

He and Susan, 43, a systems engineer at Sandia National Laboratories, are also juggling care for two school-age daughters at home while the state decides when to let students return to school. The Simonds are desperate to see their small business fully open up again — and to get their girls back into the classroom — with recommended safety measures and precautions.

“My children aren’t socializing with people, and they are suffering because their social network is gone. Their school network doesn’t exist like it used to. The kids are showing their stress. The adults are showing their stress,” Susan says. “It’s been one long freak out. I mean, you add anything else onto us and we’re likely to crack. I’m surprised we haven’t yet.”

Even though President Trump has talked about reopening schools and getting the economy back on track, the Simonds don’t see an ally in him.

As registered Independents who voted for a third-party candidate in 2016, they plan to vote for Joe Biden.

Lena and Joe Crandell have been married for 26 years. They met at Bible camp when they were both 14. They are church volunteers and help at-risk youth in foster homes.

Lena, 46, identifies as Latina. Joe, 46, is white, and also a retired Army staff sergeant who served several overseas assignments, including a tour in Iraq.

What keeps Joe up at night is thinking about the fellow veterans he’s lost to suicide. He looks to the American flag as the one thing that should hold us all together, but sees a divided America. His wife does, too.

What keeps Lena up at night? Without hesitation, she says the Democratic party. Both Lena and Joe feel the left has divided the country by focusing on differences.

“I think the party is pushing the narrative of racism, pushing violence, they incite division,” she says.

The Crandells voted for President Trump in 2016 and plan to vote for him again in November.

Deborah Veres, 56, lives on the Navajo Nation, where she teaches social studies at a middle school. She recently went back to work, and is, as she says, scrambling to find a way to teach during the coronavirus pandemic.

When you first meet Veres, you’d never know how tough she’s had it. She lived in foster homes as a child. She’s overcome poverty. She’s a recovering alcoholic. But none of this got the best of her. She’s now a single mom to six kids. And she’s always been determined to break free from the struggles, the stereotypes and the racism she has faced all her life.

As a Navajo woman, she says her Indigenous community has endured so much trauma over generations that in some ways they are better equipped to handle the economic and emotional toll of this pandemic than the rest of the country.

What keeps her up at night, she says, is her kids. She wants them – and their generation — to be informed citizens. She worries they won’t be because of the deluge of disinformation and conspiracy theories.

Veres believes the events of the last few years, particularly the killing of George Floyd, have exposed systemic racism that had long been downplayed and ignored, and that President Trump’s time in office has finally unearthed some uncomfortable truths about America.

She thinks Biden lives with a “whole lot of white privilege.” She hasn’t liked him for a long time, but she still plans to vote for him in November.

Hear Deborah Veres on how in the midst of a pandemic, she “felt hope”

Dr. Connie Liu and Dr. Chris Hoover live near the Navajo Nation. She’s an OB-GYN and he’s a urologist. They serve the rural, mostly indigenous community.

Many of their patients come from areas without reliable Internet access and cell phone infrastructure. The pandemic, say Liu, 42, and Hoover, 40, has amplified inequalities around healthcare access.

The couple believes public health — especially when it comes to wearing masks — has been politicized, and as a result they have become more politically engaged to advocate for their patients and for their two young children.

“I want to hear messages that are science-centric and patient-centric, and I don’t think we’re in that place” says Liu. She worries that public health experts and institutions like the Centers for Disease Control have been sidelined in COVID-19 response efforts.

They plan to vote for Joe Biden in November.

Hear: Chris Hoover and Connie Liu on the politicization of mask wearing

(NPR is not using Mary Jean’s last name because she fears retribution for her political views. For the same reason, she did not want to be photographed for this story.)

Mary Jean, 70, spent her career in media and marketing, living in a few different big cities, including Los Angeles and Manhattan. She and her husband moved to Arizona years ago for work, then retired there.

But now she can’t even imagine visiting those cities. She has kids living in Chicago, Portland and just outside of Los Angeles, and she worries about what she views as escalating violence in cities. Though overall crime has generally been on a downward trend in many big cities during the pandemic, Mary Jean says her friends and relatives tell her otherwise. She says before her husband died suddenly in mid-July, they had talked about whether they’d ever go back to New York City.

“We went back to New York every year for a couple of days and walked the streets and shopped and dined and drank and go to shows,” she said. “We even said, ‘I don’t know if we’ll get back there.’ “

Mary Jean is a registered Democrat, but she voted for Donald Trump in 2016 and plans to again this year. She supports his positions on immigration and believes he’s an effective champion for law and order.

Hear: Mary Jean on how she “hates to see our cities going”

Why did we visit Arizona and New Mexico for this story? Both are among the Sun Belt states that experienced a stubborn surge of COVID-19 cases this summer. The casualty count among minority groups, particularly Indigenous communities, are staggering. Then there’s the political bent of these two states. New Mexico appears to be leaning toward Democratic nominee Joe Biden while next door, Arizona has consistently voted for Republican candidates in recent presidential and state elections. This year, Arizona is considered a toss-up state with many polls showing Biden with a slim lead over President Trump and one of the biggest forces at play in both states is the growing number of eligible Latino voters.