For indispensable reporting on the coronavirus crisis and more, subscribe to Mother Jones’ newsletters.

Two years ago, Catherine Poole and her family were living in the Atlanta-adjacent city of Decatur, Georgia. They had great friends and neighbors, but when they had a second child, their two-bedroom house began to feel small, so they put it on the market and began looking for a roomier place in the close-in suburbs. But after repeatedly getting outbid, they quickly discovered that the market was hotter than they had thought. They didn’t find anything in the nearest exurbs, either. “We got pushed out,” Poole remembers. “Every offer we made was outbid by a ton. It was insane.”

Finally, the realtor showed them a handsome house in Paulding County, an exurb community about 30 miles northwest of Atlanta. It was big enough, and the school system was well-rated. Poole had some misgivings: She didn’t love the suburban vibe, and the schools weren’t very diverse. Still, the space for the price was great, so they made an offer and moved in a few weeks later.

Things haven’t exactly gone as planned: As soon as she moved, Poole could tell her family didn’t fit in. The neighbors seemed horrified that she had lived in Atlanta—they thought her beloved city was dangerous and crowded. When the coronavirus pandemic arrived, things got worse. Poole was disturbed by Gov. Brian Kemp’s refusal to enact the most basic social-distancing ordinances, but her community seemed to cheer his decisions.

Poole was disturbed by Gov. Brian Kemp’s refusal to enact the most basic social-distancing ordinances, but her community seemed to cheer his decisions.

In early August, no sooner had schools reopened with in-person instruction when a back-to-school photo of a crowded hallway at North Paulding County high school went viral. The student who took the photo was suspended, then un-suspended a few days later. In the wake of the ordeal, at least 12 students tested positive for COVID-19 and the school had to close for a week.

But that wasn’t the end of the national attention focused on Poole’s new home. A widely circulated Facebook post showed Paulding County parents discouraging other parents from having their children tested for COVID-19: 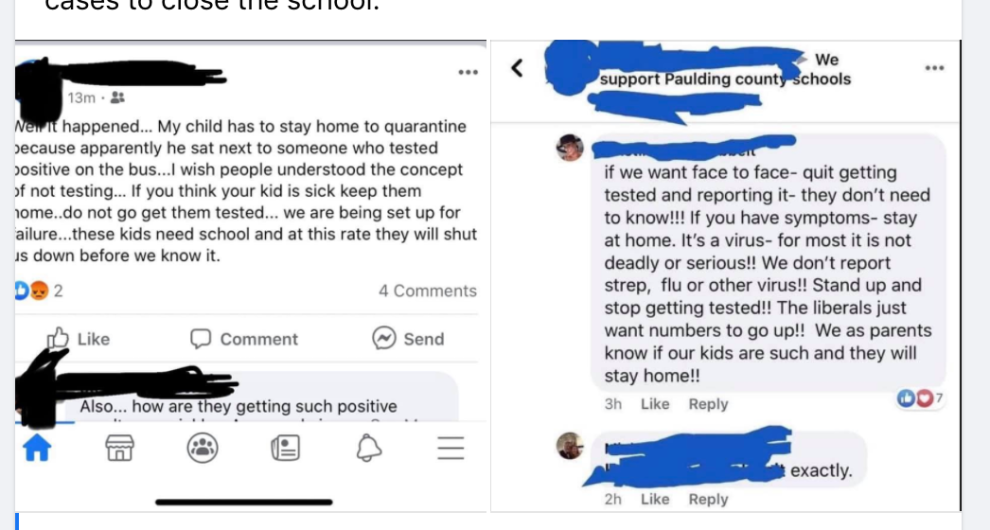 A video of a school board meeting showed a school board member suggesting that schools have children change seats to skirt the CDC rule that people who have spent 15 minutes or more within 6 feet of someone with COVID-19 are considered close contacts:

Per the Georgia Department of Health, schools are required to classify anyone who has been within 6 feet of a covid victim for 15 mins or more as a close contact. Theresa Lyons, who sits on the Paulding County BOE, suggested students change seats every 14 mins to get around this. pic.twitter.com/TLRlTr8ua1

Meanwhile, parents in the county protested virtual learning, some of them espousing the QAnon conspiracy theory:

At least one Q-anon supporter showed up at the Paulding County Board of Education meeting to demand that schools remain open. pic.twitter.com/irP0plaBMf

For Poole, sentiments like these are chilling but unsurprising. Poole, whose name has been changed to protect her privacy, is relatively new to Paulding; she takes the pandemic seriously; and each new incident underscored the vast rift between her and her neighbors. Now, she and her husband are house-hunting again. I was curious about what it was like to live with two children in a place where the dominant values are so at odds with her own. In a phone call last weekend, Poole told me about her increasingly alienating experience of living in Paulding County.

On her neighbors’ perception of Atlanta: It’s been two years and this county still baffles me. When we first moved in, I met some neighbors. When we told them we moved from Atlanta, they said, “Oh, God, why would you live there? Thank God, you moved out here and got out of that mess, huh?” They see Atlanta as the big, scary city, with traffic, crime, and violence. Some other parents have said, thank God you got them out of that school system. We were in one of the best school systems in the state, but they have a stereotype of the inner city: that there’s a lack of education, that everyone’s just some vagrant. Honestly, I hate to say it because you know, we’re neighbors, but now I kind of try to avoid them. There are a couple of people who live in our neighborhood who I do get along with and are super nice and very friendly. But I still drive down to Atlanta to hang out with my real true friends.

On life in the pandemic: Starting in March, we were very secluded. My husband immediately started working from home. I was working at a restaurant, and I quit. The kids were home. We played in the front yard and the backyard, and that was it. Going off mostly Facebook posts of people I know, I could immediately tell their viewpoint on it. “Masks are for sheep and you’re gonna lose oxygen,” all that.

Going off mostly Facebook posts of people I know, I could immediately tell their viewpoint on it. “Masks are for sheep and you’re gonna lose oxygen.”

On social media in Paulding County: I’m on a bunch of Paulding County Facebook pages. There’s the official Paulding County School page, and then my daughter’s middle school page. And then there’s three or four other pages that I follow. One page is usually about local politics—people running for office. But when school was coming up, every day it was, “You can’t keep my kids home. This is all a hoax, and we’re going to keep kids home for nothing. It’s the flu!” And then there’s the “don’t worry, in November this will all disappear” posts. And “this is a liberal agenda to keep the kids out of school.” Some of these are crazy conspiracy theorists, so far out that they just don’t even make sense.

Also, I’m on the unofficial Paulding County schools page, which is mostly parents. I’d say about 98 percent of the posts are about how we have to return to school face to face. “Don’t you dare try and force my child to wear a mask. That’s my civil liberties. It’s infringing on my rights.” There was even one woman who said something like, “Masks terrify my child. If I send my child to school and his teacher is wearing a mask, he’s going to have PTSD for the rest of his life.” And people are agreeing. They’re going, “You’re absolutely right.” Every now and then there’s a single post like, “Hey, guys, really, what’s the big deal if we mandated masks, like what’s the biggest problem that would come from that?” And they get ripped apart. The tone has changed slightly since those photos came out of the school. “Let’s pray for our staff and students that they remain safe.” But that’s just some people. The overall consensus is still, “I’m not gonna wear a mask, and you’re an idiot for wearing a mask.”

On one of the pages, someone was making masks and said, “I can put anything you want on this mask.” His example was, “Stay six feet back.” And then another one had a smiley face. And people were laughing at it and going, “good job selling something that doesn’t work.” And then someone says, “Hey, would you print ‘this mask does absolutely nothing’ on a mask?” Then someone else said, “Will you make one that says ‘this is a hoax’”?

On parents discouraging other parents from having their kids tested for COVID-19: I saw that post. Basically, I think the woman was saying that her son’s bus buddy tested positive, and they said that either her son needed to quarantine or get a test. And it was just this rant of, “All we’re doing is increasing numbers and making our county look bad. The more cases that we have, the more that show up. They’re going to shut us down.” I think all they care about is that they don’t want these kids virtual.

On school before COVID-19: I really liked the middle school. I liked the teachers—they were very responsive. I would get an email that said my daughter failed a test. And then a couple of days later, I would get a phone call from the teacher just to check in and let us know why she failed. It wasn’t just one teacher, it was all them. Even when they had to go virtual starting in March, I was getting phone calls and emails every day. “How can I help you today to talk you through this virtual stuff?” I was really impressed.

In June or July, they sent out a survey for input on the 2021 school year. I would have wanted a hybrid option, maybe two days in, two days off. But there wasn’t an option for hybrid. It was, “How do you feel about sending your kids back to school?” And then, “If we offered a virtual option, would you take it? Yes or no?” Nothing about masks, nothing about social distancing, nothing about class sizes. That was all from the school board. I’m personally impressed with the middle school teachers, but I think the problem is the school board.

We went to go visit my parents, and we all got tested just to make sure that we were negative before we went up there. My daughter said, “Well, what if it was wrong? What if we’re sick and we don’t know it, and we get someone sick?” She’s very concerned about the health aspect of it, but she doesn’t know how it’s become politicized. She doesn’t really understand that.

On life going forward: I went from the shock and awe of moving here and thinking “Wow, these people are crazy” to “I can’t change these people.” I’ve become numb to it all. There’s really nothing personally I can do to change people’s minds. If we do interact with neighbors, it’s when they’re out cutting their grass or something and we’ll say, “Hey, how you doing?” and that’s pretty much it. We’re not going to restaurants. We just stay home. We’re doing what we have to do as a family to keep ourselves safe.