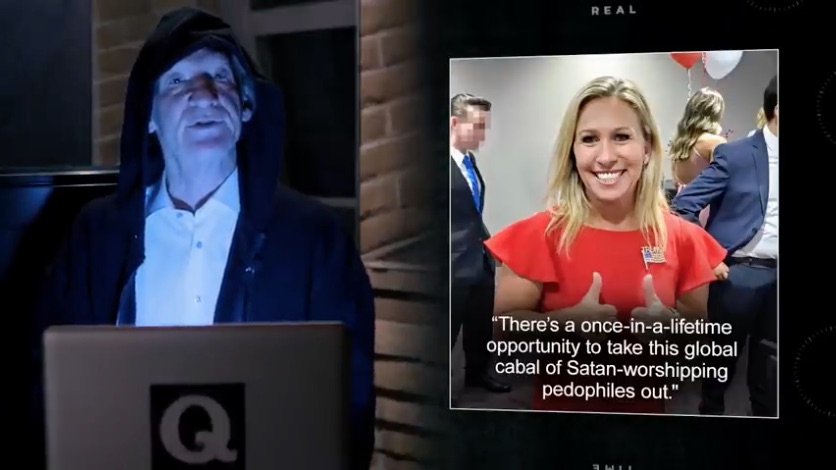 Comedian Bill Maher pulled his “Q” laptop and dark robe out of the closet to reprise his “I am Q” mockery on Friday night, skewering the Republican Party for its slow-motion embrace of an absurd, pro-Trump conspiracy theory that believes a cabal of secret pedophiles are running the country while also practicing child sacrifice and cannibalism.

Two years ago, Maher took aim at the budding, myth-making QAnon group, mockingly revealing himself to be the actual, shadowy figure, “Q.” But two years later, Maher felt compelled to parody it once again, after President Donald Trump offered a winking embrace of the bonkers movement during a White House press briefing this week, a move that came a week after he tweeted out congratulations to a QAnon follower who won a House GOP primary in a deep red Georgia district, calling her a “future Republican star.”

“There are two heroes,” in the QAnon made-up narrative, Maher reminded viewers, “Trump and Q himself, an anonymous leader who founded QAnon with one overarching theme: that you’re being lied to, and everything you think you know is really the opposite.”

“That’s why it makes sense within QAnon that Trump, who more Americans see a sex creep who walks in on half-dressed beauty pageants, actually is the savior who will destroy sex fiends,” he joked, as the screen cut to him in darkened room huddled over his computer. ” It’s also why it makes perfect sense that I, libertine, atheist, pot-smoking Trump-hating Bill Maher. I am Q, which I revealed on this show two years ago.”

“Well, it’s two years later and i’m going to tell you again: I am Q, and true Q followers know it’s the truth — because it makes the least sense!” Maher explained. “Think, people, that’s all I’m saying: take what you thought, flip it, and then assume the opposite of the opposite of what you know is not true. Then, and only then, are you thinking like a true QAnon.”

Maher then dismissed those who dared to point out the byzantine contradictions and failed predictions of the movement. “Don’t be intimidated by the so-called ‘sane’ people who say we’re ‘stupid’ and ‘gullible’  and lonely, aimless losers,” Maher archly said. “Oh, you can make fun of us all you want, but the joke’s on you because QAnon is now so mainstream that 71 Republicans running for office this year have espoused QAnon beliefs.”

“That’s more republicans than believe in evolution, or vegetables.”

“So laugh now if you want, but just remember, that in the Republican Party, today’s lunatic is tomorrow’s mainstream representative,” Maher added. “Yeah, sure, call her crazier than a shithouse rat today — in four years you’ll be calling her the winner of the Iowa caucus. ”

Watch the video above, via HBO.