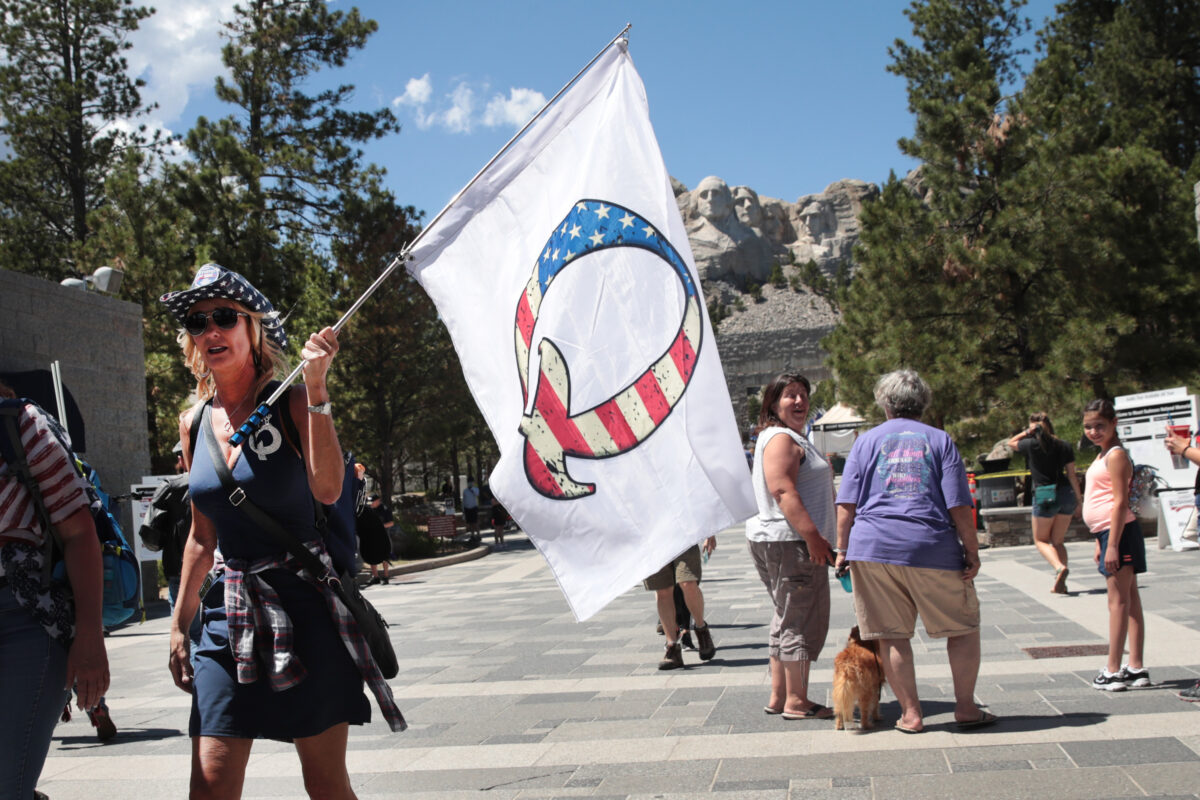 A bipartisan chorus of outrage rippled across Twitter on Wednesday night after President Donald Trump gave a not-so-subtle embrace of the toxic and anti-Semitic QAnon conspiracy theory.

At his daily White House press briefing, Trump was asked by a reporter about the QAnon online phenomenon, which pushes absurd myths about pedophilia and child sacrifice and that the FBI has warned is a potential domestic terror threat. After professing ignorance about the conspiracy theory, Trump noted that its adherents strongly support him and blithely noted that their flattering (but factually-absurd) claims about his presidency sounds like a “good thing.”

Democratic presidential nominee Joe Biden’s spokesperson was quick to compare Trump’s comments to his “very fine people” about the neo-Nazi protests in Charlottesville and condemn the tacit acceptance of QAnon as “giving voice to violence.”

Numerous conservatives sounded off as well, echoing the condemnation from George W. Bush’s former campaign architect, Karl Rove. And they were far from alone:

Why in the world would the President not kick Q’anon supporters’ butts? Nut jobs, rascists, haters have no place in either Party. https://t.co/uWIMg7clJz

Trump’s praise for Laura Loomer shows again, you can’t have Trump without Q. Welcome to the GQP, where people like Loomer and Taylor are held in higher regard by the party leader than folks like Mitt Romney. https://t.co/lNQRGoCTVU

Watch the whole clip. This is like Christmas for QAnon. Unreal. https://t.co/xTkQ6Z4V4u

Trump refuses to denounce one of the most toxic and dangerous conspiracies in America. He embraces QAnon’s support for him. He was told part of their belief system and he didn’t reject it. This is the leader of the Republican Party.

This QAnon answer is a fucking disgrace. It’s a death cult. The FBI identified QAnon as a violent domestic terrorism threat and Trump is pretending not to know what it is while absolutely encouraging them and incentivizing more insane behavior.

“I don’t know much, except that they like me very much, which I appreciate,” says Trump on:

QAnon — a conspiracy group the FBI has said is a potential domestic terrorist threat.

Trump: “these are people that love our country.”

The president of the United States is attacking the Goodyear Tire & Rubber Company and defending QAnon.

Today’s Goodyear/Q events are Trump distilled: Everything – and I mean *everything* – is subordinated to “do they like me?”

going to revise my timeline here and say QAnon will be GOP orthodoxy next year if Biden wins and takes office. https://t.co/h8vdmFPatA

There’s so much crazy in here, it’s hard to know where to start:

a) he actually takes QAnon seriously instead just dismissing it

b) he likes it bc they like him, as if he’s a therapy patient not POTUS

c) if America goes, the world goes. Yeah, the other 7B people on the

Now the President says “I’ve heard these are people who love our country.”

just watched the trump/qanon clip. this is obviously where it was all headed…and yet it is a pretty terrifying watershed moment. like, there weren’t hardly any guard rails on this thing but now…

As a person whose hair is on fire I gotta say, I am getting very 2016-esque “now tell me about this Pepe the Frog character, ha ha” vibes from some QAnon coverage. https://t.co/zt8raUP7S8

Trump named the beast and Q networks are glowing…

And, now I will say what needs to be said. Q is an anti-Semitic networked faction that uses social media to broadcast political and medical misinformation to the world.